Slaves Summoned to Defend the Confederacy

​​On October 3, 1862 the Legislature of Virginia passed an act calling for 5,000 “Slaves for Labor on the Public Defenses.”  The document provides useful census data for Virginia including total population and the number of slaves in each county.  In 1862, Pulaski County had a free population of 1589 and a total slave population of 1636.

Frank Harmon, on a Petition to Enslave Himself

On December 3, 1855 the Pulaski County Court indicted Frank Harmon, “a free negro,” for “remaining in the Commonwealth contrary to law,” that stated, “if any slave hereafter emancipated shall remain within this Commonwealth more than twelve months after his or her right to freedom shall have accrued, he or she shall forfeit all such right, and may be apprehended and sold by the overseers of the poor of any county or corporation in which he or she shall be found, for the benefit of the poor of such county or corporation.”  On April 22, 1857 Frank Harmon petitioned the Pulaski County Court to enslave himself and requested Anthony Owens as his owner.  The court assessed Frank’s worth at $1,100 and Owens paid half upfront with the remainder due at a later date.

Thomas Cloyd's Last Will and Testament

​“My first desire is for my wife Polly Cloyd to receive a comfortable living on the domain where she now lives together with my son David Cloyd, which thereafter will make provision for, and should my son David Cloyd depart this life before his mother, without any heir, in this avent [sic] my wife Polly Cloyd is hereby othorised [sic] to make sutch [sic] a disposition of my Real as well as my Personal Estate as she may think proper.”
Thomas Cloyd was a slave-holder and owned an estimated 52 slaves at the time of his will that he divided up, bequeathing 36 of  “the following negroe slaves, to wit, Moses and wife Florah, and three of their sons, to wit, Allen, Stephen, and Westley, also Stephens wife, Mariah, and son Henry, Also Stumpy, Jim, and his wife Susannah and five Children, to wit, Edward, Elisa, Margaret, Luana and Felix, also Isaac, and his wife, Lynda, and three Children, to wit, Luisa, Cardine and William, also the following Children of Man, Charles, by his first wife to wit, Abram, Mathus, Lucy and Joseph, also Big Edward, also Big Jim, also Daniel, also Hannah and two of her Children, to wit, Sampson and Mimd, also Nancy and five of her Children, to wit, Rachel, Samuel, Tom, Herod, and Ellin,” to his son David, while the remaining “negroe Slaves, to wit Nathaniel and wife Esther and five Children, to wit John, Martha, Jacob, Amos, and Hariet, also Charles and wife Emmerly, and her child, Martha, and Charles son, Andy, by his first wife, also Seyntha and her son Frank, also Mary, a daughter of Nancys, also Zachariah a son of Moses,” were bequeathed to his son-law Gordon Kent. 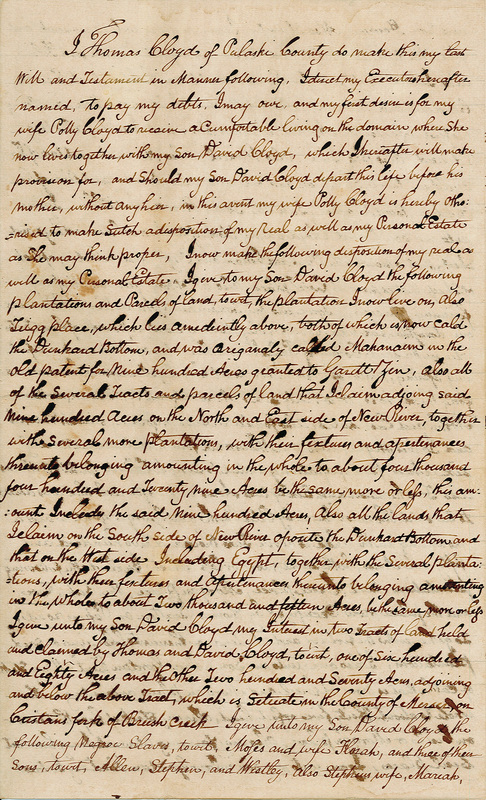 Comprised of former slaves from Newbern and Pulaski, the Newbern Colored Brass Band was one of the first organizations, other than the Freedman's Bureau, for blacks to join after Emancipation. ​Founded in the late 1870s, the original members of the Newbern Colored Brass Band were Peter Ingram, Stuart Charlton, Mack Houston, A.C. Houston, Jesse (Heston or Heaton), H.W. Clark, P. Chapman, and John Stourd. The band appeared to take their job quite seriously and instituted several strict policies for their members including abstaining from alcohol consumption during practice and concerts along with a $1 fine for missing practice.  In 1880, Dod Chapman, leader of the Newbern Colored Brass Band, sued James Stuart for $12 because he was absent from band practice 12 times at $1 fine per absence.

​Located just south of Newbern, Towe’s Ferry was descended from the original ferry franchise, operated by the Godby family, which owned the largest segment of land on the opposite side of the New.  The Godby family gave its name to the high cliffs that rise from the New, even now known as “Godby’s Cliffs.”  Though there were several ferries, Godby’s Ferry was the principal river crossing from the “Hiwassie side” to the “Newbern side.  The ferry franchise passed through several operators until Elijah Dalton began operating it sometime around the Civil War, though it continued to be known as “Godby’s” for some time.

In 1879, the Pulaski County Court discontinued Elijah Dalton’s ferry franchise along the New River, known as “Godby’s Ferry,” for “refusing & failing to ferry across his said ferry free of charge William Stuart the Superintendant of Poor.”  In 1880, Wm. R. Cole sued Dalton for refusing to relinquish his possession of the ferry franchise and land he lost the previous year. Pulaski County used the land once owned by Dalton to build a bridge across the New River. In 1899, the Virginia Bridge and Iron Company was awarded the job of building the bridge across the New River for $14,897 and began construction.  The building of this bridge was surrounded by a great deal of  conflict and legal action, coming as it did around the same time as the courthouse in Newbern burned under suspicious circumstances and the county seat was relocated to Pulaski.  The original contract was let to a company that declined to build because of the intensity of the conflict and the near certainty of being embroiled in lengthy legal battle.  The Towe’s Ferry Bridge was opened in 1900, but in the great flood of 1916 it was washed out and not replaced. The ferry was reopened and served as the key river crossing until closed in the late 1930s for the building of Claytor Lake.

​From 1863-1869, Thomas S. King provided room & board for E.H. Harman's wife, children, and horse.  J.M. Davis, administrator of E.H. Harman, deceased, informed King that E.H. Harman was a Confederate soldier who died at the Battle of Cloyd's Farm in May 1864. Harman's widow and children were not held liable for any debt incurred after his death. 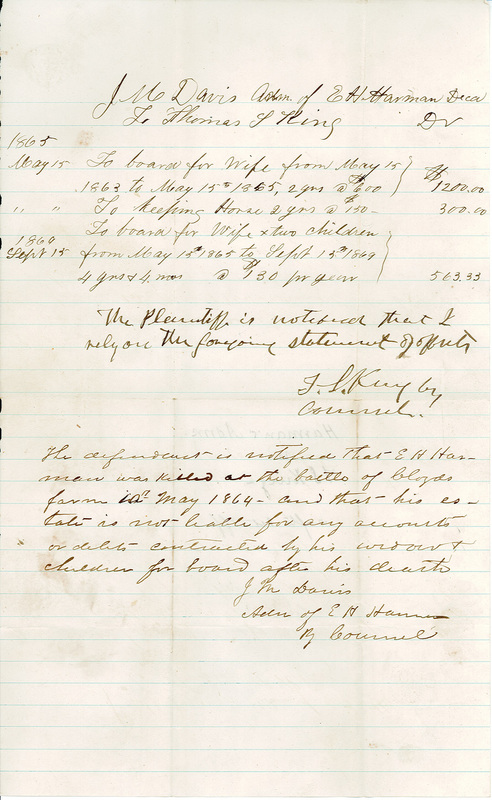